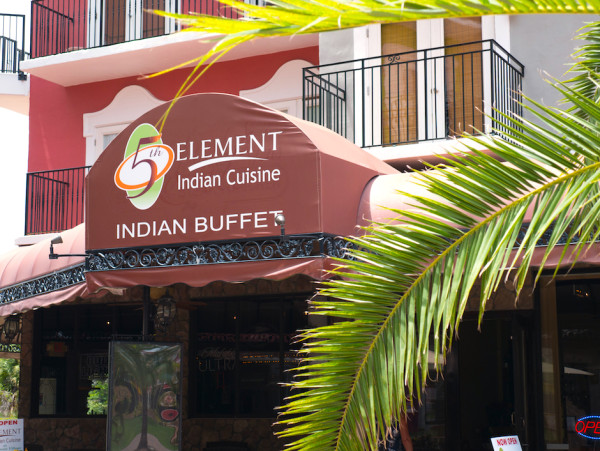 Most everyone knows the four classical elements of the universe: wind, air, fire, and water.

Some may not know, however, is that there is a 5th element that exists beyond the naked eye. It is thought to be an intangible element that seems to hold the other elements together. Many believe that this 5th element refers to a heavenly-presence or a spirit of some sort. These are concepts that do not usually associate with a restaurant…

But like the actual fifth element that keeps all other elements of our universe in concert, The Fifth Element restaurant in Palm Coast keeps our taste-buds and stomachs in-check.

I hadn’t had a bite of authentic Indian food since I’d moved to Palm Coast from the Bronx, back in 2007. That was unfortunate because I’m always in the mood for real Indian food, even though my diet has changed considerably since then. I’m Vegan now.

Because there were no Indian Restaurant options in Palm Coast (until now that is), I usually cooked my own versions of curried lentils and rice and went about pretending it was the real thing.

When my friend Cristina mentioned a new Indian restaurant was about to open in town, I got sooo excited. And I knew right away I had to go try it and get a real taste again—opening night! We were hopefully optimistic, as European Village has a really varied selection of restaurants: Italian, American steak, Latin Fusion, etc. There also used to be a Japanese and French restaurant, too. Actually, the Fifth Element is now where the French restaurant (Le Rendezvous) used to be. This new Indian Restaurant has been a  welcome (and much needed) addition to the European Village’s collection of restaurants serving Palm Coast residents and visitors.

As we entered the restaurant, I was immediately taken in by the ambiance. The lights were dimmed and with soft Indian music in the background. Everything was so elegant… On the other, my friends and I wanted to get our belly dancing on! The Bollywood on the couple of mounted screens was mesmerizing…

Okay, now the food. Because I am vegan, it can sometimes be super difficult to find good options when eating out. I don’t know what I expected but the words curry and naan bread did come to mind as I picked up the menu. It had been a while since I sampled Indian food and I felt somewhat overwhelmed by the Bengali (South Indian) options. The servers, who appeared to be from the area of note, helped us make educated, well-informed choices. They were very patient…

After pondering the menu like it was a matter of life and death, I finally picked something: A Manchurian veggie bowl with a side of rice. The menu described it as “veggie fritters and vegetables cooked in a spicy Manchurian sauce.”

My friend Cristina, who is a pescetarian–meaning, she doesn’t eat meat, but will eat fish; ordered fish curry. “I didn’t even know they made that!” she said.

Another friend ordered the same as Cristina; one ordered chicken curry; and one ordered yellow dal (lentils and spices). We all ordered naan bread and rice as our sides.

Soon our food came and by now we were ready. Just the smell reminded me what I’d been missing all this time. One thing I noticed that was super unique was the rice— Jasmine rice. It arrived in little buckets! Out of all things to be excited about that was definitely close to the top. Everyone was happy with their meals.

Cristina, who isn’t the biggest fan of spicy food—she has the spice tolerance of a five-year-old—ordered her food mild. But this is Indian Food. Of course, there’s going to be a little kick. But she still said she’d order her same dish anytime. hen we finished, one friend ordered ice cream. Unfortunately, our server told us that the machines were all out of service. But he’d give us all double ice cream for free the next time we came in! Now that’s service.

They also recommended that we come back for the lunch buffet. That’s one of their big selling points, they said.  I can see why that is. It’s a lunch buffet for under $10 with dozens of options to choose from. For people who aren’t familiar with Indian food, the buffet is the perfect option for them to try a little bit of everything and figure out what they like or don’t. That’s next on my list.

I think the big takeaway is that “The Fifth Element” has something for any and everyone.

And we finally found some insight into that mysterious “fifth element.” My friends and I are already looking for a second round of insight.

My 5th Element Experience was written by Jazzmyn Falloon.

Jazzmyn is currently a junior at Matanzas High School. She is an AP and Honors student who is active in after school clubs and varsity sports. In her spare time she enjoys capturing photos and trying new foods that will tingle her taste buds.