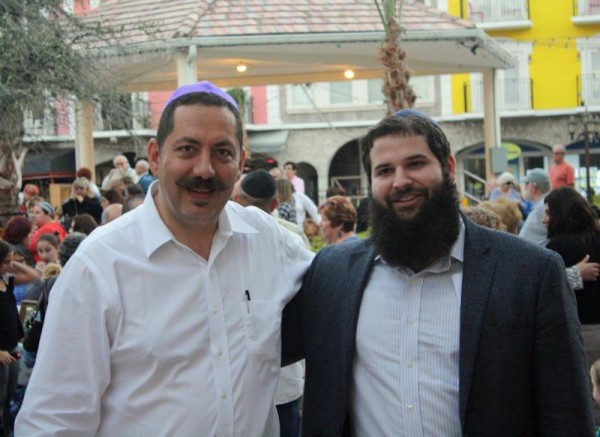 You don’t have to be Jewish to appreciate a walking dreidel on stilts. Whether he’s made of clay, as the song goes, or something else entirely doesn’t matter. In that spirit of playfulness, Chabad of Palm Coast’s 2016 Hanukkah celebration, which took place for the first time at European Village in Palm Coast, could be described as a return to form of sorts for the historic Festival of Lights. (*Catch the story of behind the holiday at the bottom of this post.)

Many eras ago, Hanukkah–and every other Jewish holiday for that matter–took place in the “shtetl,” a culturally specific word referring to the old world Jewish villages of Eastern Europe.

Back in those days, however, the holidays were closed off to all but those who inhabited the insular hamlets. Not so at this modern party that Palm Coast hosted a couple of weeks ago. As it were, European Village already plays host to an array of different cultural experiences, even the newest arrival, an Indian Restaurant in Palm Coast.

Festivities, which took place on the third night of Hanukkah’s eight, were open to everyone and included, in addition to living dreidels: A special menorah lighting at center stage; delicacies of latkehs; donuts, and other confections; and a spate of exotic animals: A hedgehog, a python and boa, a ring-tailed lemur, and an African serval cat (sweet!). If that wasn’t enough a lit up, colorful Hanukkah drone whizzing overhead like it was a levitating, spinning dreidel. The main attraction, however, was a live performance by Jewish Rock Star Sam Glaser at Center Stage. Glaser had traveled from California to be there. The party was just as much for Cesar Romero, who’s not Jewish, as it was for anyone else. Cesar’s been hanging around and working in European Village for about a decade, a span of time that, comparatively speaking for the village, is the rough equivalent to that of Jews lighting menorahs. Technically, he was working this evening too, functioning the sound system for Glaser’s set.

A Hanukkah parody of the popular Mark Anthony song, Vivir Mi Vida, played as he kindly stepped away to answer some questions. Asked if they’d ever seen an event like this, Romero said that, while there’s been other faith-based events, “There’s been nothing on the Jewish side of things. So no, not at all…”

Prior to agreeing to participate, Cesar admitted he’d never heard of Glaser, but he was quite impressed to learn how extensive the musician’s bio was. “He’s not just a national star; he’s an international star,” he said.

I’m sure people in the Village enjoyed this just as much as anyone. These are the things we need to do to share culture, bring people together, not apart… Ok? And I think it’s just fantastic. What does it do, it’s just another reason to appreciate someone else’s culture, and to learn.” Just before, as Glaser sang, Romero, working the sound system could be seen on the bandstand apron singing himself, mimicking Glaser’s words–even the Hebrew.

Rabbi Zev Sonnenstein of Temple Beth Shalom–a synagogue that practices a hybrid of Reform and Conservative Judaism, two of the three primary branches of the faith–was one of a number of rabbis out to support the event. Sonnenstein, a classically trained cantor, has a long history with Glaser. He had this to say of his old friend:  “He’s a spiritualist who uses his music and writings to bring people to another level. He speaks to Orthodox, Conservative, Reform,” and everyone else, he added. “He makes it accessible.”

A quick listen to the middle of Glaser’s set demonstrated how:  Before he began, Glaser asked the crowd:

“Did you know John Lennon made Jewish music?”

The keyboard instrumentals that followed were quickly recognized from the classic Beatles song, “Let it Be.”

Except Glaser’s lyrics didn’t begin with the anticipated, “In times of trouble, Mother Mary comes to me..”

Rather it was, “When I find myself in mid-December, store-wide savings call to me, I remember Judah Maccabee…” (*See Judah in the Hanukkah story below)

Audrey Rosen teaches figure drawing and painting at the Flagler County Art League and is an active member of the local Jewish community. “I think it’s good because people say there aren’t any Jews in Palm Coast. There’re lots!” she said. “Something like this is good, because it brings more people to us.”

That certainly the feeling of Rabbi Levi Ezagui of Palm Coast’s Chabad of Palm Coast, one of the main party organizers. At this time last year, they were attempting the same type of celebration but they were holding it in the Chabad Center parking lot. Ezagui came to Palm Coast about a year ago after spending close to his whole life in Ormond Beach.

“When I lived in Ormond, I asked a lot of people where they’re from and they said Palm Coast. I got to know people from Palm Coast in Ormond because it was spilling over,” he said of the desire for connection.

“There’s a big want for Jews here, and there’re a lot of people coming from other places to get it,” he said. “People want to get connected and that’s why we’re here…”

Obviously, in the two years of the Palm Coast’s Chabad center’s existence, this was the biggest Hanukkah celebration that they’ve brought to the people. (As it happened, around the world, it should be noted, other equally important Hanukkah celebrations were taking place as well. :))

Ultimately, Ezagui would love to have a huge community center here, acknowledging the methodical “step-by-step” approach required. In fact, he understands that all too well.

Ezagui, like the other Orthodox rabbis on the scene at European Village, he said, began his ministry out of his home. To go from a house to a village, an all-inclusive one at that, is a solid step indeed. It’s also a good look for European Village, too. Many of the business owners there will attest to that.

*Hanukkah, the eight-day Jewish holiday, revolves around a more than 2,000-year-old legend. The story recounts the re-dedication of the Jews’ second holy Temple in Jerusalem. After the successful Maccabean revolt against the oppressive Seleucid empire, led by the Jewish priest Judah Maccabee, the Jews found themselves in a predicament. They were virtually out of the oil. They needed it to keep their candles lit, a necessity for their re-dedication. They had just a single cruse of it for one night, but the candles miraculously burned for eight instead. And the Jews were able to make more oil for future days.

Ezra Salkin is a Palm Coast-based artist and writer. He’s also a graduate of the Savannah College of Art and Design.